react-ecs is a declarative "Entity Component System" for React.

These boids are driven by react-ecs! Try dragging and zooming! 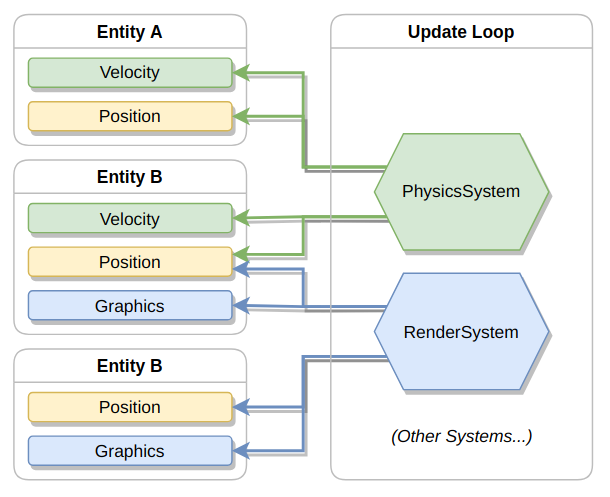 An ECS, or Entity Component System is a design pattern popular in game development. It eschews rich objects for simple Entities that compose data-only Components, or Facets as react-ecs calls them (to avoid confusion with React Components).

Logic is then handled by small update functions called Systems that operate upon the facets related to it.

In the example to the right, a common scenario is illustrated. There are a number of entities, comprised merely as a collection of simple data facets. A Velocity or Position component may hold a simple vector. Whereas a Graphics component might hold the URL of a sprite image.

Two systems, PhysicsSystem and GraphicsSystem are responsible for all the behavior and logic:

The systems ignore the entities that don't have the facets they're interested in.

ECS takes "composition over inheritance" to its logical conclusion.

There's no need to try to find the best inheritance tree to represent your problem domain.

Just slap some useful facets onto some entities and write some systems to process them. This also means entity capabilities can dynamically change at runtime.

It's a robust, easy to implement pattern that can enable a fun creativity.

The idea behind react-ecs is to allow you to describe the parts of your ECS in standard React fashion:

Let's add a system to remove entities when their Lifetime has expired:

Let's add a couple of other systems for moving entities around:

Finally, let's write a system to sync an entity's Position facet with its standard DOMView facet:

Now we can put it all together: